The Saro( Sara-a) Ko Maun is one of the very unique Fairs- festivals of Jaunsar Bawar. This Fair is organised by the Bangaon Khat after a gap of about 5-6 years on a regular basis. Saro Ko Maun was held this year on June 07, 2011 slightly behind its normal schedule, i.e. after a gap of about 9 years.

This Maun is different from all kinds of Mauns held in the area. The Mauns broadly are of two types Machh Maun and Jatra Maun. As the name denotes the Machh Mauns are a grand fishing festival while a Jatra Maun is a huge Fair. The Machh Mauns are held at much greater frequency while Jatra Muans occur after a fairly long intervals. The intervals are of at least a year even in case of a Machh Maun.

One would find predominance of Machh Mauns being organised in which Fish Catching Fest is held with a lot of guts and zest. In these fairs only male members participate and to enable easier fishing activity, a mild intoxicant powder of Timur shrub is used. These Fishing Muans are held on greater regularity in the rivers which historically and potentially are home to ample number of fish. Those who literally fish in troubled waters come in thousands to join with their Machhanos (cylindrical wooden basket) and Fatiyadis or Fatiyados(instruments with nets to entangle the fish) besides a many who prefer to hold faith in their bare hands.

However, Jatra Mauns actually are Fairs. These Fairs are held once in generations after about a gap of 50 years. These types Maun Fairs have almost the whole of the Jaunsar Bawar buzzing with festive activities over a long period of time. A very large crowd throng to the spot. Some of these well-known Fairs or Mauns are Dungyare Ko Maun(Bangaon Khat), Shiyaya (Sahiya) Ko Maun, Kirte Ko Maun( Pashgaon Khat), etc. Close coordination and minute planning are afoot between the Khat in which the location falls and the Khats in the immediate neighbourhood. Advance information is obtained from other Khats who wish to have their organised participation by sending in a Marchers Team. Thus an elaborate exercise is held prior to the holding of such Maun Fairs.

Saro( Sara-a) Ko Maun, is a Jatra Fair of Khat Bangaon in Jaunsar Bawar region. It is celebrated once in 5-6 years. The fair this year was held on May 7th, 2011 after a slightly prolonged interval of about 9 years. The Fair fest as par traditions was organised on the southern bank of river Kuthnoi, popularly known as Dungyara gaad at the Place named Sara-a. The place lies on the southern side of the river which forms as boundary of Bangaon Khat (on the South) and Taplad Khat (on the North side). This place is a hub of fertile fields owned by the farmers of Village Kolha and Shirba of the Bangaon Khat. The Place and the Maun Fair derive its name from the Deity Sara-a Ka Dev. The worship of the God Sara-a, the male deity, brings fortunes in good rains, bountiful harvests and ensures well-being of milk giving animals particularly of buffalo rearing.
Cutting a Timriatha -तिमुर Trunk to Vow holding of Sara-a Ko Maun
The Fair is held after a village more often the Village Shirba decides to take a vow for organising the Fair as a mark of obeisance and devotion to the Lord Sara-a or Saro. There is a belief that this act immediately brings rains which ensures that un-irrigated fields are not devoid of water, the water bodies are recharged and makes way for growth of plenty of fodder. The village thereafter informs the Head of the Khat or Khat Syana. He in turn calls a meeting of the entire Khat informing the Village Heads of all 13 Bangaon villages. It is finally in this meeting which can be described as General Body Meeting(GBM) of the Khat that decision about the date of the Fair is decided. Thereafter information is sent out to the married village girls, relatives, to all family members living outside, to the neighbouring Khats etc. The assigned village also arrange timur powder bag of 2-3 kgs as a symbolic प्रसाद।

Khat divided into Two Marching Teams- Uplo and Toylo Bangaon
On the Fair Day, grown-up male members of the whole Khat march towards the venue in two Teams of Uplo (Upper) and Toylo (Lower) Bangaon। They sing and dance through various villages starting with the farthest village. As the villages of upper Khat (Uplo Bangaon) are situated in line almost at equal altitude, the Pati village commences the procession called moila. It travels to Rawna, Buraswa, Mairawna, Tungroli and joins the Shirba procession at the convenient location on the way on Sendhuwa Dhar. It is at the bottom of this dhar or mountain where the holy place Sara-a is situated. The procession then make fast descend to Sara-a where the second procession of lower (Toylo) Bangaon Khat is timed to reach beforehand to welcome the Marchers or Procession from upper (Uplo) Bangaon. It is here that a Bag of Timur powder is thrown on the marchers as Prasada of the Lord Sara-a.

Procession Leading a March around the Temple of Lord Sara-a
The joint procession thereafter runs around the Temple of the Deity Sara-a chanting Jaikara in reverence. The visitors take turns to offer their prayers at the temple. Dressed in colourful attire, a large number of devotees and the fair goers turn-out each year from far-off villages and places.

A Treat of Unique Song and Dance
The group song and dance at the place is a treat to watch as a variety of songs are performed by groups from different villages. The guests are welcome to join the singing and dancing teams with no limits on the number. This year was a revelation in as much as the village participation of village Maipawta is concerned. Famous for their foot-tapping performances, the village had brought their band of bajgis in a uniform and shining dress code.

Biggest turn-out at 2011 Maun-Fair
The onlookers and observers felt that the gathering this year was the biggest so far. People could be seen in long queues from quite a distance in all directions making a beeline to Sara-ake. This shows that the Fair is experiencing greater popularity which is quite at a variance from the trend of outward migration affecting the Jaunsar Bawar area.
To provide relief from the heat and humidity of the valley, the Fair had a host of vendors offering cold-drinks, ice-creams, snacks, fast-food, even rice-n-curry. 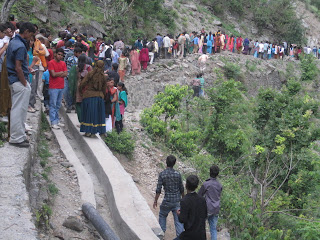 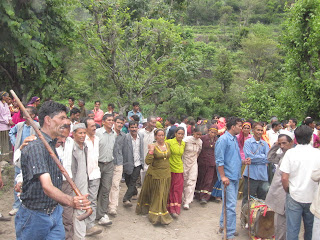 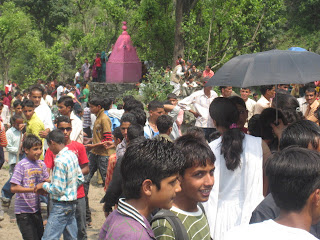 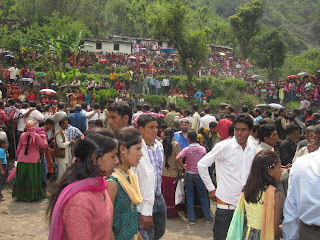 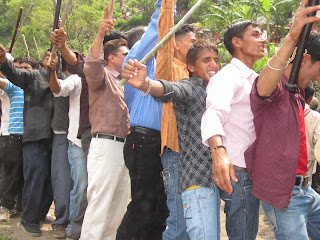 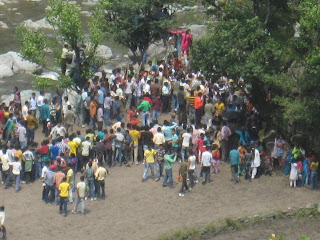 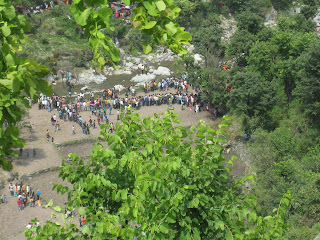 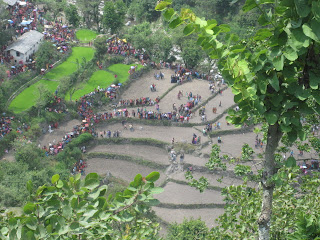 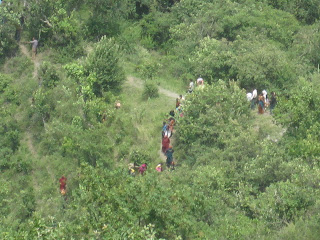 Posted by Ramesh at 7:16 AM No comments:

Ramesh
New Delhi, India
Belongs to Rithan Clan of Mairawna, one of the 13 Bangaon Khat Villages of Jaunsar Bawar area in Dehra Dun District (Uttarakhand). Wish to contribute to the betterment of my Village, Khat, my area- Jaunsar Bawar, Uttarakhand or the place I am at present thereby to the society.